Country of My Skull

This book has been on my reading list since I began studying South African history. It’s a difficult book to begin because it seems disjointed with random comments about the selection of the Truth and Reconciliation Commission. I finished it a couple weeks ago, but put off reviewing it because I have so much to say.

This is a masterpiece, subtitled “Guilt, Sorrow, and the Limits of Forgiveness in the New South Africa.”

First, the book is a first-person account by a journalist covering the Truth and Reconciliation Hearings in post-apartheid South Africa. The emotional toll of being part of the hearings is powerful, painful, and real.

Second, the book is part poetry. Antjie Krog is a poet as well as a reporter, and some of the language in this book is breathe-taking. Krog’s language immerses us in the emotions of surviving the TRC; this is far from just a historical document, which it also is.

Third, Antjie Krog is a white Afrikaner, a member of the class responsible for the initiation and perpetuation of apartheid. Of COURSE, prejudice means lumping any member of a group with all other members of that group, so guilt cannot be assigned summarily to all Afrikaners. Many were oblivious–perhaps by choice, but still oblivious–to the travesties happening in the country. This factor, however, give Antjie the perspective of overwhelming guilt for all that happened. UBUNTU–a South African term meaning “because you are, I am” translates as collective guilt and therefore, collective need to accuse, to confess, to tell the truth, to compensate, to forgive, to listen, and to heal.

Fourth, the confusion of all of this is woven into the book. There is no easy answer; there is not easy recovery. But there is truth and healing if people can work together. Krog captures these complexities as a whole–almost as if the book is a living, breathing entity.

Desmond Tutu was chosen to oversee the commission. One cannot read about the man without falling in love with him as a funny, gentle, emotional, kind, forgiving human.

For those of you who don’t know, apartheid means “Apartness” or “separation” in Afrikaans–the language unique to South Africa, based on Dutch, but with sprinklings of English and native languages from South Africa mixed in. It’s spoken nowhere else in the world. Apartheid was a practice in the country for a few centuries, but wasn’t sanctioned by law until the Bantu Land act of 1913, and official Apartheid policy in 1948, when the Nationalist Party took control of the country. It lasted until the early 1990s–officially ending with the election of 1994. Some history of South Africa

When F.W. de Klerk was president in the early 1990s, and Nelson Mandela and other ANC leaders were released from prison and their life sentences of treason against the oppressive racist government, for the first time, the entire population of the country was allowed to vote. It was a forgone conclusion that when Africans–Black South Africans and Coloreds  (an official term in South Africa for mixed-race people) included, all voted, the ANC (African National Congress) would win the election, and therefore, the ANC party leader–Nelson Mandela–would be the next president. Basically, de Klerk knew Mandela would be the next president WHILE he was still in prison. He instituted negotiations with Mandela while still a prisoner. That’s another story–but Mandela was moved from Robben Island to the inland prison then Victor Verster–now Drakenstein–where a four-bedroom house was built on prison grounds to house the future president. It’s from this prison that Nelson Mandela made the internationally famous freedom walk–the Long Walk to Freedom. 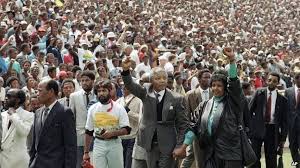 After the end of apartheid, and after Mandela’s release, and his ascension to the presidency, the TRC was given the overwhelming task of seeking some sort of peaceful transfer of power from the white minority to the Black majority. Many, many Africans, justifiably, wanted to treat the whites as they had been treated for a the last centuries.

If you’ve seen the movie Invictus, you’ve seen one instance in which Mandela had the opportunity to seek revenge and let blacks dominate whites; instead, he uses a braver, more just system of decision making, unpopular immediately, but wise beyond words long-term.

These are the ideas that pervaded the Truth and Reconciliation Commission. Because people are flawed, because some people can’t let go of anger, any such system is flawed, and that’s what Krog recounts in this book. However, the South African TRC may stand as one of the best efforts by an entire country to make a transition to a democracy.  This book is a beautiful, living tribute to the effort. It is heart-breaking and honest, sometimes so painful you have to set it down in order to breathe. It’s long and dense, but I think this recounting of the TRC will stand as the classic.

Last, Here’s Desmond Tutu. I need to end this with his picture because he embodies the spirit of the Truth and Reconciliation Commission. 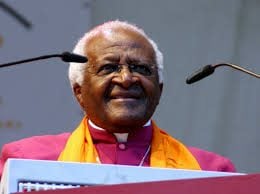