Having Fun on the Bike

Everything about how I’m riding my bike these days goes against my natural inclination. After spending thousands of miles (at least hundreds and hundreds) in the school of pain and hard knocks, led by Mark Skarpohl (Skarpohli, as I call him, also known as Skarp, Mr. Twin Pipes, and several other nicknames), when you encounter wind, what do you do? Lean over, get low and dig into the wind. You go harder. What does that do? It elevates your heart rate. Doctors ordered me to keep my heart rate under 110 until June–six months after my brain surgery–and nothing that has become instinctual about cycling over the past 19 years fits that order.

The first hill I meet, I exert more pressure. Heart rate goes up. I turn into the wind. Heart rate goes up. This is completely counter-intuitive. It’s not what I’ve learned from Skarpohli or from Mike Busch, Gianni Anderson, Terry Beenken, Dan Friedrichs, and Brian Koenemen, who were the first guys who taught me to ride a road bike and taught me to draft and ride a paceline.

Now, granted, those guys also know how to take it easy and how to have fun on the bike. I’m not saying they only hammer whenever they go out. They don’t.

I’m just saying that I think about them when I turn into the wind, see my heart rate rise and have to back off. Soft-pedal until my heart rate goes back down. What? Yeah, my life and my brain are important enough that I am listening to the doctors, but I’m having to re-learn a lot of things. I’m rethinking what it means to ride a bike.

Few of the people I usually ride with want to ride my pace this year for very long…and I’d only ask them to on a rare occasion. (I do that). We have fun putzing along, and I appreciate those friends willing to putt along with me.

So what have I done? Mostly, I go to the woods. In the woods, the wind barely exists. It’s blocked. I turn into those welcoming trees, and the wind just goes away. If, on the outside chance that I crash (I haven’t since the brain surgery, knock on wood and hopefully not with my head), I land softly on grass or dirt. Absolutely no pavement. And I’m not going fast, so even if I should crash, it’s not going to do much damage.

What have I found? Fun! I feel like a kid on a bike, just tooling around, exploring. I’m riding the April Nicollet Bike 30-Days-of-Biking challenge, so I have to get out at least 2 miles a day. I go to the woods determined to find or at least photograph something new. It is truly like being a kid again. Exploring. Having fun. I love my bike, and I’m not kicking ass to go faster than or keep up with a paceline of a bunch of other people.

Maybe I’m discovering another stage of being a cyclist. Who knows. I know I’ll want to hammer again, and I’ll want to do time trials. And go fast. But for now, this is enough, and I’m having SO MUCH FUN.

And here are some photos from this month. I have been riding around the woods, where the former Haunted Hayride was staged until ten years ago. Exploring has made my slow rides all the more fun! 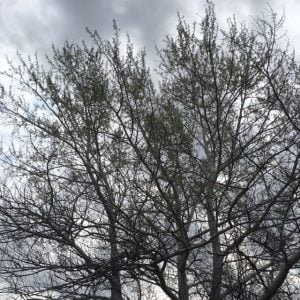 Here’s admiring the bursting buds on the trees. 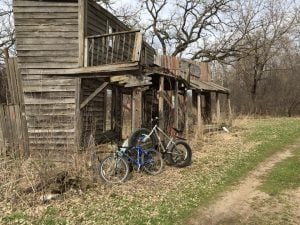 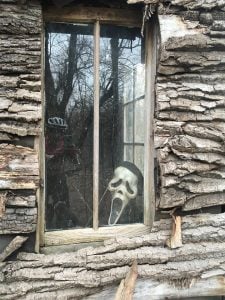 The tattered Greeter. He doesn’t look so threatening against the blue sky. 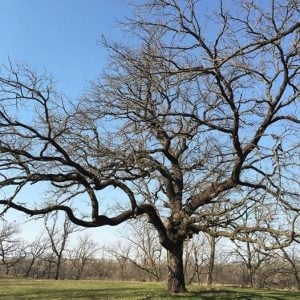 My favorite tree in the “Haunted Woods.” Beautiful against the blue sky, but it always looked creepy in cemetery light.