Kingdom of the Blind by Louise Penny

It’s no secret that I’m a fan of mystery writer Louise Penny. Chief Inspector/Superintendent Armand Gamache is one of my favorite characters to follow and spend time with (along with Corc O’Connor, Cormoran Strike, Virgil Flowers, and a few others. But Gamache and Corc O’Connor, those guys I’d like to have dinner with as well as following their literary adventures). 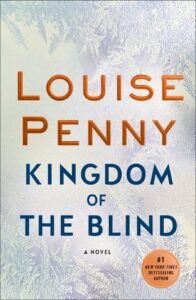 But I’m here to talk about The Kingdom of the Blind, Penny’s book that I just finished. It’s sad, a tragedy as most murder mysteries are. But it’s also gentle and full of honesty/dishonesty, and kindness juxtaposed with cruelty and jealousy. It’s a blend of human complexity, as I think all of Penny’s novels are.

This one, however, felt different at the beginning. It opens with all the characters I’ve grown to love in Three Pines, Quebec: Armand Gamache, of course, Jean-Guy Beauvoir, whom we have grown to also adore, Renn-Marie, Clara, Myrna, Ruth, Gabri, Olivier, Annie, and Honore. But the difference with beginning this book is that I kept laughing out loud. Usually, the stark reality of the drama sucks us in, and I’m holding my breath in the very first chapter. This time, I simply sat among my friends and laughed aloud over and over at their banter, and at Penny’s stellar plays on words within characters’ thoughts. Crotchety Ruth, the seemingly crazy but famous poet cracked me up so much I wanted to go bring her a scotch. The warmth, even with the derogatory banter among the friends felt different enough that I wondered if there was something different about Louise Penny’s state of mind while writing this book.

So I flipped to the author’s note at the end of the book. Usually I read these avidly, but only when I’ve completed the novel. I was glad I read it right away this time.

I knew from author’s notes in a few previous books that Louise Penny’s husband had been suffering from dementia. I knew from the author’s note in Glass Houses  that he had passed away.  In Glass Houses, I wasn’t surprised to learn of this horrifically life-changing event because the book  felt differently constructed than the others. Most of the books in her series move along chronologically. Glass Houses wove together a brilliant and cohesive mystery, but through use of time jumps and unexpected shifts in time. She always makes stellar use of flashbacks, but Glass Houses was more than that–we had to follow a weaving of events that weren’t chronological. Based on the other Gamache books, I wasn’t expecting it. However, it worked brilliantly. When I finished, I marveled at it, and wondered why she chose that method. Then I read that her husband had died, and somehow the psychology of making disjointed events work seemed all the more genius to me.

Then this one, begun well after Michael’s death–which I was so sad but gratified to understand–seemed as if she had settled in to appreciate people and love that surround us, even in the worst of times, and it all fit. She also explained how she had decided to leave Armand Gamache books behind after Michael passed away–that it would be too painful to write, especially since many of Armand’s characteristics were inspired by her husband’s personality.  I was awed. And sad at the possibility of no more Gamache books. But she admits that a “funny thing happened on my way to not writing this book.  I started writing.” And she explains how Armand came to life again, word by word. I settled in for another great mystery, eager to spend time with my friends in Three Pines. I was not disappointed. At ALL. What a book. And the beginning of the book makes so much sense. It made me love it even more than I already did.

Need I say that if you like mysteries, I recommend getting lost in the Armand Gamache series by Louise Penny?  And now, I feel as if reading these books allows me to count the author as a friend, too! Silly me.

Last comment: I’m also listening to State of Terror currently. I always have one paper and one audio book going at any given moment. State of Terror is by Louise Penny and Hillary Rodham Clinton, of all people. I’m not done yet, so I can’t make a definitive statement. BUT so far, it seems to be a brilliant comment on what can happen after a disastrous four years of a egomaniac in the White House. It shows Clinton’s deep understanding of foreign policy and what terrorism really means. I’m fascinated, and so far, I recommend it heartily.

(I am not the only person interested. I tried to request it at the library, and was 39th on a waiting list. I decided to get the audio book immediately instead!)