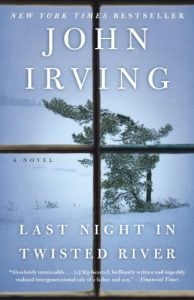 I’m a huge Irving fan. I don’t even know how many of his books I’ve read. However, sometimes one of these heavy tomes of his leaves me thinking that an editor is probably afraid to hack up one of John Irving’s manuscripts. I thought this one could do with some editing. Maybe I’ve spent too much of my life writing YA and I’m always thinking, “If this slows the story down, I’ve got to cut it.” I did think this book could use some trimming.

HOWEVER, although there were places in this book where I just wanted it to end, and although I thought a couple times, “Is this section really necessary for the story?” (the Chinese restaurant segment, for example), when I did reach the end, it was a beautifully satisfying way to conclude this epic story-adventure.

I don’t know John Irving. I always feel as if I’m one degree of separation from him. I’ve never met him, though I came very close to it. My ex-husband Terry Davis and he were at the University of Iowa Writer’s Workshop together. Terry and I were on our way to the Twin Cities to have drinks with John when he was on a book tour, but we got waylaid by a snowstorm. That’s another story, but I’ve always felt some connection to the guy through Terry.

Now, I have loved lots of his stories. Not loved others, but they still haunt me, so I guess that means they’re wonderful stories–or that John is a wonderful storyteller. I wonder if other people could get by with the way his epic lives (of his characters) ramble into all sorts of incarnations before they tie neatly back together at the end. For instance, movie versions of his books sometimes only pick one segment and cinematically depict that. Nobody could make a movie of this ENTIRE saga hang together in less than five hours.

But I guess that’s not really a criticism. That’s not why we write; that’s now why we read. It’s not a contained-in-two-hours-for-entertainment medium. THANK GOODNESS! And thank you, John Irving, for another terrific set of characters, so real, we assume there are huge parts of you inside the Daniel Baciagalupo character–which is exactly one of the things the book rails against (readers assuming what happens in a novel happened to the writer)! The old logger Ketchum is one of my favorite all-time characters. He’ll join my personal annals of heroes not unlike Atticus Finch. I won’t forget this book, and I took much away from it.

It’s work to plow through the whole thing, but it is, ultimately well worth the effort.