State of Terror by Louise Penny and Hillary Rodham Clinton 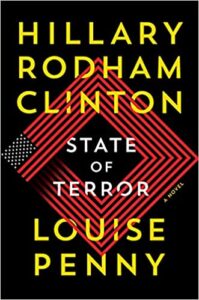 I am a huge Louise Penny fan, as I’ve already explained, but I was a bit nervous stepping into this story. I loved it.

Of course, Clinton’s pot shots at our former president he-who-must-not-be-named hit the mark almost too accurately, but why not? When the shoe fits…

Clinton’s experience as Secretary of State brings a realism to the tension in this book that made it far easier to swallow as a thriller than many such novels do. Some of the subversive-behind-the-scenes political action isn’t surprising, but it’s certainly disturbing. Hearing it from Clinton…well, that adds another level of fascination.

I laughed out loud when Three Pines, Quebec, showed up. When the scenes and characters from the Armand Gamache series appeared, I laughed out loud–for joy of the familiar, I think. I imagined Clinton and Penny coming up with that twist and laughing together, too.  As a reader, I believe it was pure fun to be in this high-tension political thriller and then be thrown into Three Pines, the village I associate with perfect tranquility (in spite of the horrific crimes committed there).  I loved that we got a tiny tie-in to Armand Gamache. I wasn’t expecting that. And Penny’s golden retriever also got a cameo appearance (I read her author’s notes fairly religiously in the Gamache series books, so I recognized her dog immediately).

But the point here is that this is an absolute page-turner. Clinton’s political experience, Penny’s ability to create characters, dialogue, and tension while crafting amazing prose–well, the blending of their expertise made for one amazing story, in my opinion.

I listened to the audio book on this one, or I would have torn through it in three days. There were a few times I could just imagine Clinton and Penny coming up with an idea together and flying with it, egging each other on. And at the end, I imagined them laughing at how some of the pieces tied together so beautifully. I recommend this whole-heartedly. If you lean liberally politically and you are a Penny fan, you’ll love it, I’m sure.

I know that Louise Penny and Hillary Clinton are friends. This story actually made me love their friendship, too.